Bernie Sitron had been working for his father Jack in their print shop for a number of years when Bernie realized that he wanted to move in a different direction. In June of 1955 Advance Stamp & Sign opened its doors in Norristown, PA. The initial shop sold rubber stamps, notary seals and other marking equipment. Bernie was running a successful business when his son Steve started working for him in 1971. Steve helped expand the business both in manufacturing technology and sales. Advance stamp started to show more focus in the sign industry while still selling marking equipment and rubber stamps. Steve became well versed in all aspects of the company. In 1984, after much growth and three location changes, Bernie was ready for retirement. Steve purchased the company from him and continued to expand the business.

Original photos taken when we first opened in 1955.

Steve’s son Elliot joined the company in 2005 with the desire to someday follow his father’s footsteps and one day own the company. When Elliot joined Advance Stamp & Sign so did some state of the art equipment. The laser engraver allows for more precise and more efficient manufacturing of stamps, seals and signs. The rotary engraver equipped with an automated braille system allows for the ability to manufacture ADA compliant signage. Advance Stamp & Sign’s Large Format Printer contributes to the company with brilliant print quality aiding in the manufacturing of indoor and outdoor signage.

Steve purchased the building at Advance Stamp & Sign’s current location in West Norriton, PA. This location is the largest of the company’s history. The larger space allows for more expansive projects and easier manufacturing. 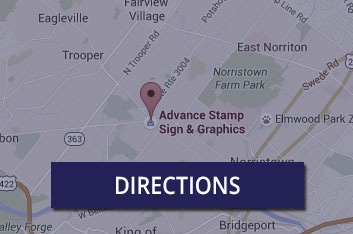 Our organization has had a working relationship with Advance Stamp for over 5 years and we have nothing but praise in the way they conduct their business operation. The work is done in a professional and business like matter and the staff is extremely friendly and helpful.

I’ve been using Advance Stamp for over 7 years to produce signage for my commercial office buildings. They have always been responsive, professional and provide great products at reasonable prices. I am happy to recommend Advance Stamp as often as I can to my tenants and to other Property Managers.

I just want to take a moment to thank you and your staff for the great service that you have given us here at Aramark over the years! The nameplate signage that you create for our staff workstations have worked great over the past years and we will continue to use this product and service from your company.

The team at Advance Stamp and outstanding customer service made the ordering process for our business quick and easy. They worked with us to come up with the best design and turnaround time is always quick. Quality products and service!

We recently picked up the silk screened T-shirts that you did for us. I just wanted to personally say thank you for another job well done by your company. We appreciate the attention to detail that your staff exhibits and have been pleased with all of the signage and printed garments that we have purchased.

I’ve enjoyed working with Advance Stamp & Sign for several years now, not only have they provided a quality product but they’ve always provided quick response times.

Need a shirt, hat, or promotional item for your team or an upcoming event? Peruse this catalog and let us know how we can help you with our #screenprinting services! ...

Share on FacebookShare on TwitterShare on Linked InShare by Email